The Dalloway is officially for sale.  We are looking for $ 3,000.00. I'll be shutting down this blog once she's found a new home, and starting up a new one.  I sure hope we can find the right owner for her.
Posted by Dalloway at 6:38 AM 2 comments:

I re caulked all the chain plates, but there was still a moisture problem on the aft port bulkhead.  We had to resort to the time honored tradition of dumping buckets of water over the boat until we found the source of the leak, and unsurprisingly, it was around the pump out.  Since we installed that while on the water, I may not be surprised that we had a leak there, but I am a little disappointed that it took us so long to think to check it for leaks.  Added a bit more caulk to that so hopefully when we test it next weekend it will be good to go for a while.

Meanwhile I have been looking at boats for sale.  For shame. We even went to see a few. Double shame.
Posted by Dalloway at 5:22 PM No comments: 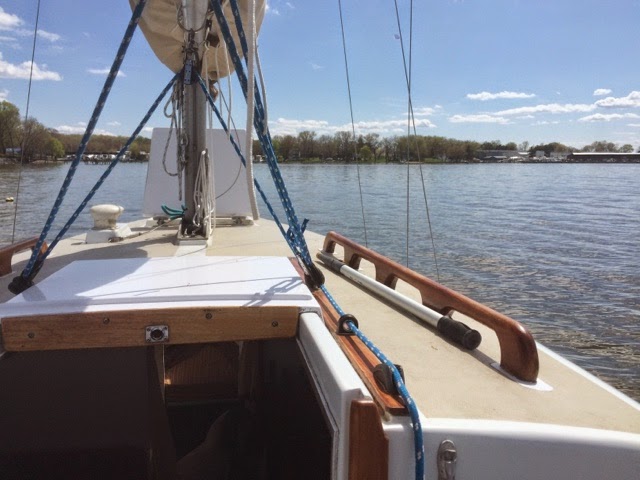 I believe this is our earliest launch in the history of ever. 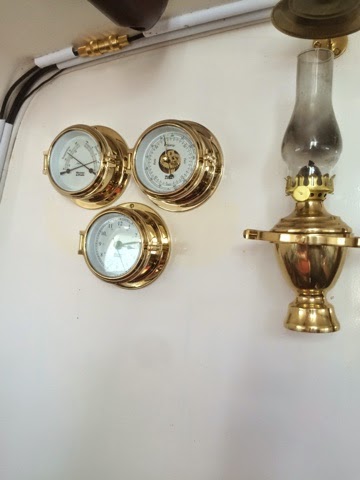 Posted by Dalloway at 2:13 PM No comments:

After many years of hoisting the anchor and 30 feet of chain by hand we have decided to install and anchor roller. As anyone who has a Grampian know, everything at the bow is really tight. There's no space to work with at all so we are doing the roller at an offset. Matt has already cut out a section of the toe rail(eek) to allow for the roller. We have a piece of flat aluminum to shim it to height and also some fancy space age plastic of some kind to use as a chafe guard since the anchor rode will be crossing the bow slightly more than it would if it could go through the forward chocks. This should allow me to raise and lower the anchor without assistance so I'm looking forward to that, as it was the only task I can't do.
Hadn't been down much over the winter as we had a lot of personal issues. We found a lot of water intrusion in the saloon and were freaking out about leaks until we realized the port lights were not dogged down.... So that was an easy fix any way.
Other pre Launch projects include machining and installing the new rudder post cap I ordered from holland marine, refinishing the wooden tiller, trying to clean the stink out of the water tank, and rebedding the chain plates. They are leaking a bit and the moisture has definitely taken a heavy toll on some of that new woodwork inside. :(
Posted by Dalloway at 7:54 AM No comments:

The toilet is in! We haven't christened it or anything, but the pump out and vent fittings are in the deck and hull and sealed in.  Everything is hooked up we just need to fill the water tank and give it a whirl.  It was a perfect fit for the available space and the hold down brackets seem very sturdy. The flush valve has a stainless steel stem so it should be harder to break than the last one.  I did feel a little bad putting the old potty in the dumpster since I'm sure somebody could have replaced the seals and such and used it but it seemed to nasty to solicit anyone who might want it.

Meanwhile we had a whole weekend of crazy.  Saturday on Black Horse Pike in Somerdale we saw a motorcyclist hit by a car.  The rider was on the street on his back under the car.  Instead of being sad or injured, he was angry enough to jump up, jump on his bike and speed away leaving a pile of rubble behind.

Then at the yacht club there was a small blue sailboat that appears to have been anchored and abandoned on the outskirts of the mooring field. The hatches are open, the boom is laying down in the cockpit, and there appears to be a small inflatable boat deflated and draped between the shrouds.  There was water in it but I got a bad feeling about it and didn't approach too closely.  There was no decomp smell so I don't think there was a body inside but you never know.  . . 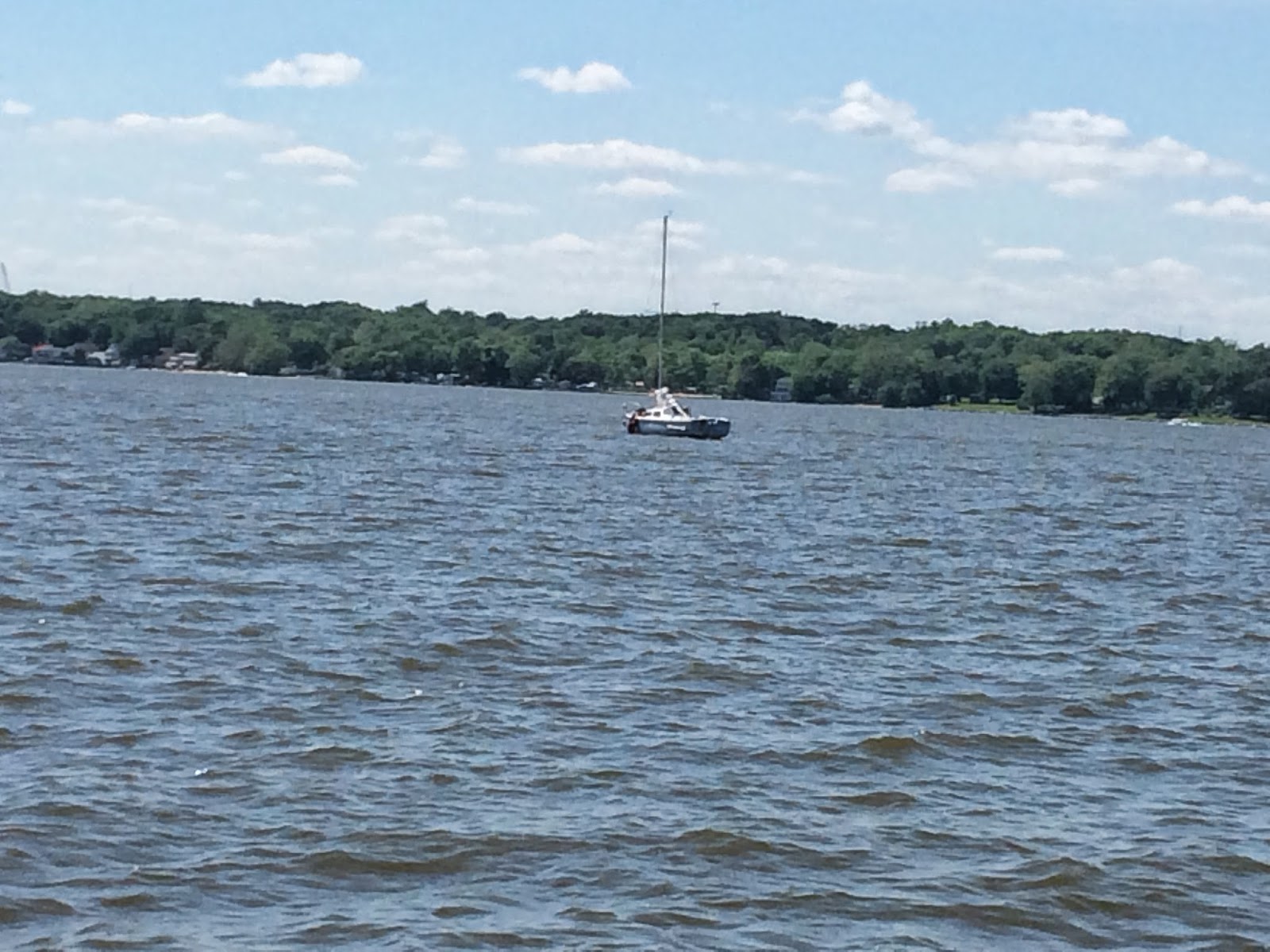 So after that a nice brand new center console power boat, I mean, brand spanking new, 20 foot center console, pulled u p to the club dock.  The skipper walked up the dock, out of the gates and up the road and hadn't come back when we left at 6:00.

Meanwhile, we were trying to get some work done.  I sewed on ties to the lazyjacks to tie the sail pack in position.  This way if we need to take it off or lower it we can just untie the ties very easily and the lazyjacks will remain in place. 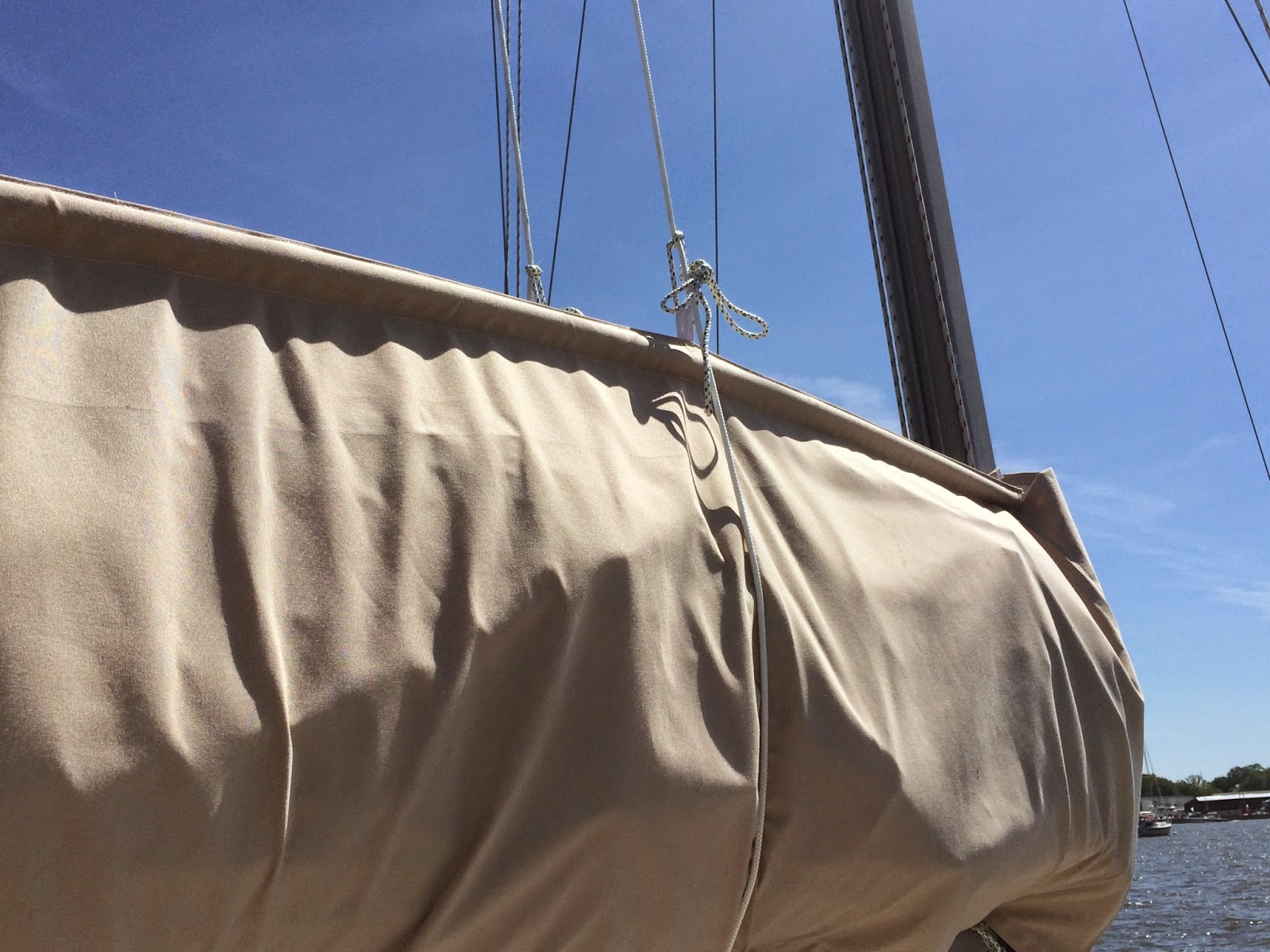 Here are some nice shots of the holes in the boat and the plugs that came out of them prior to the toilet install: 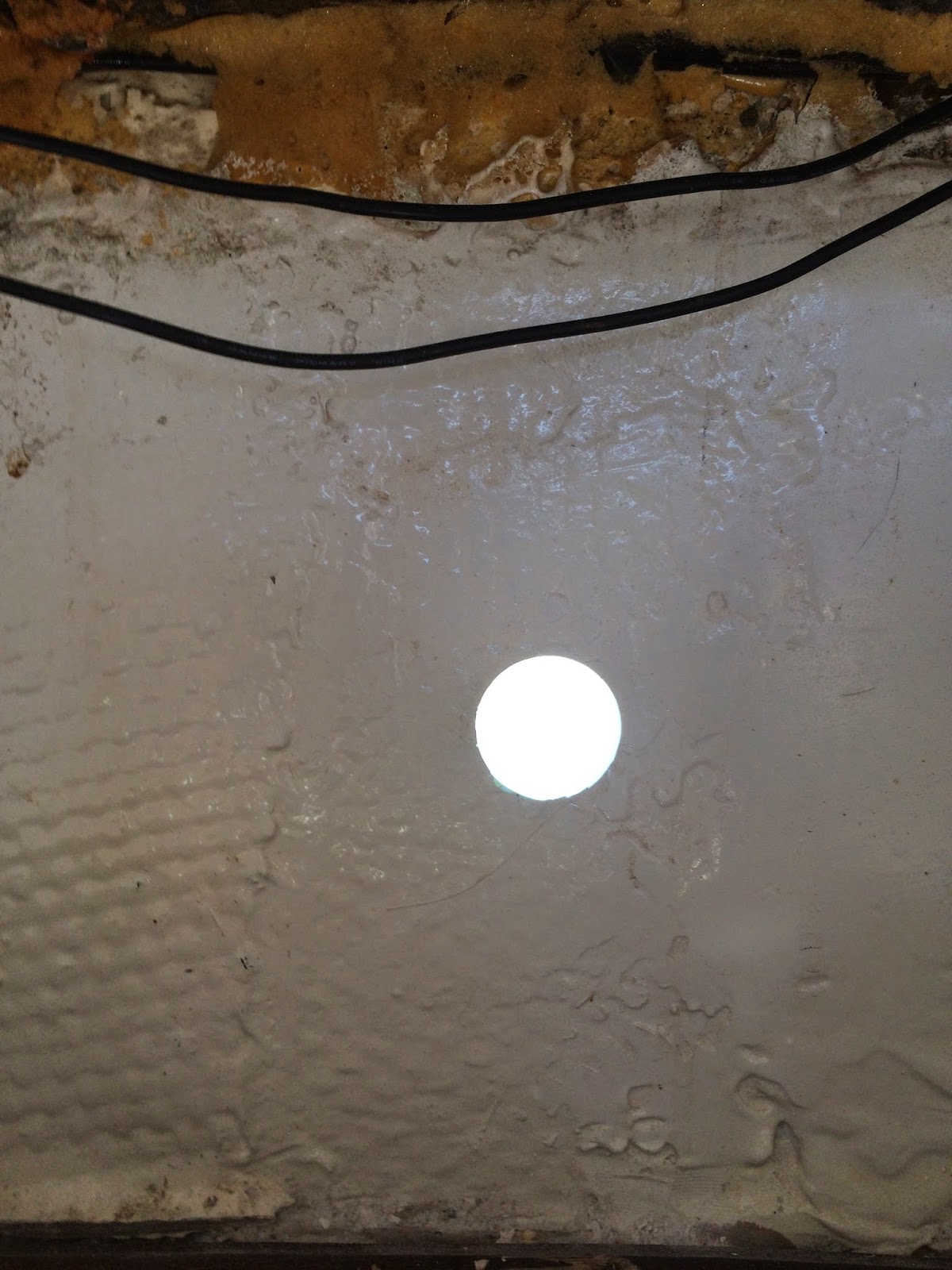 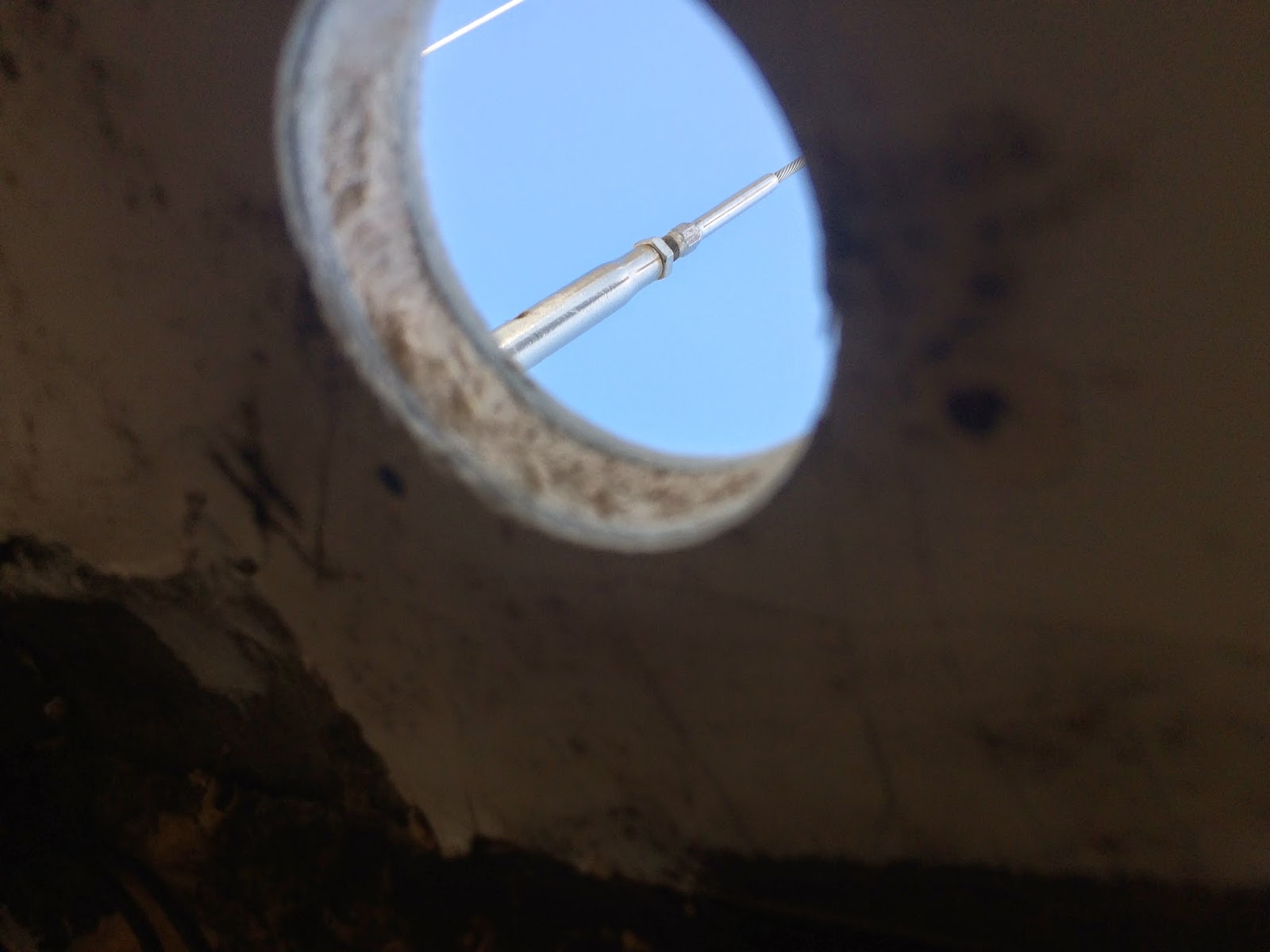 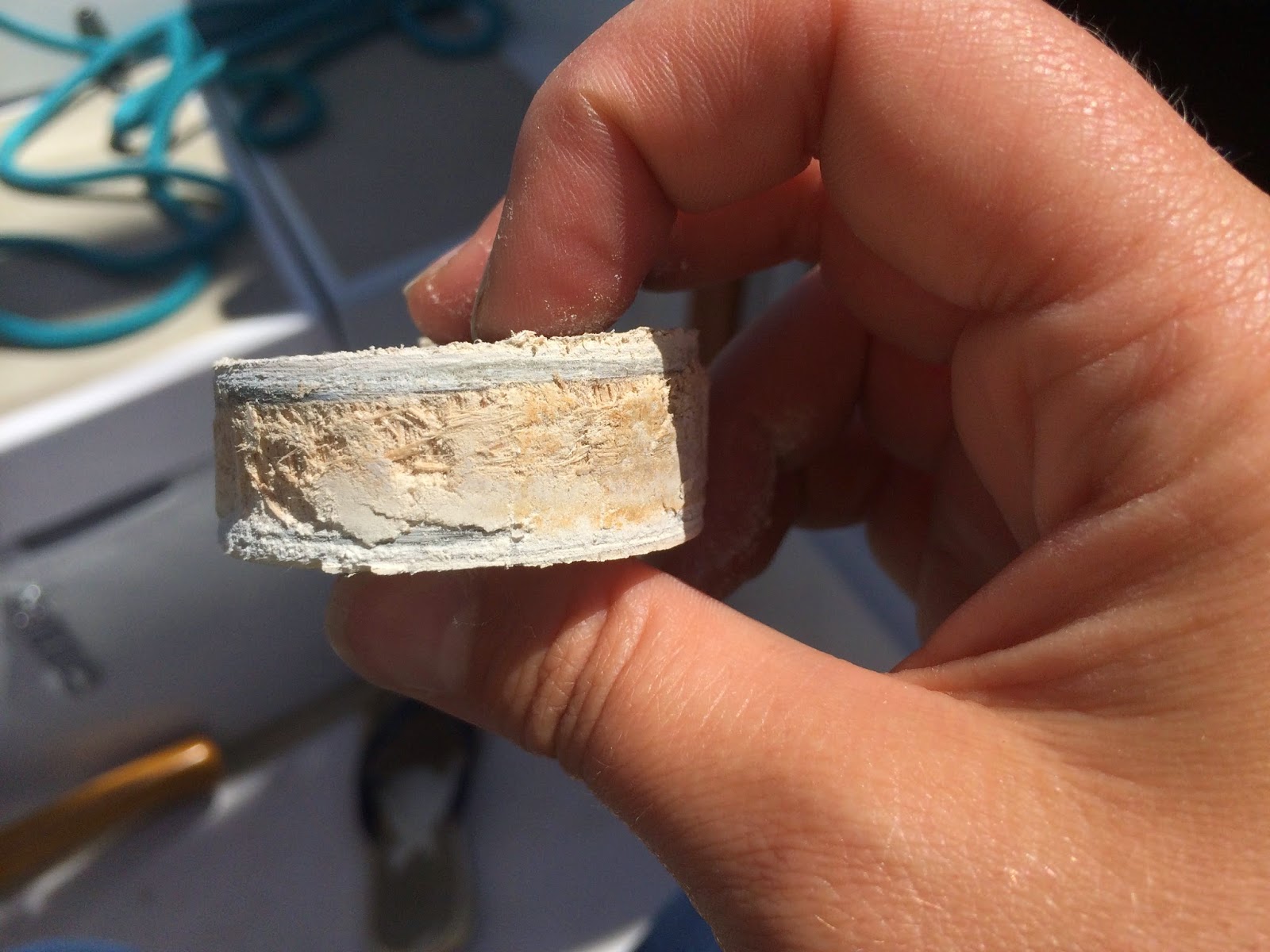 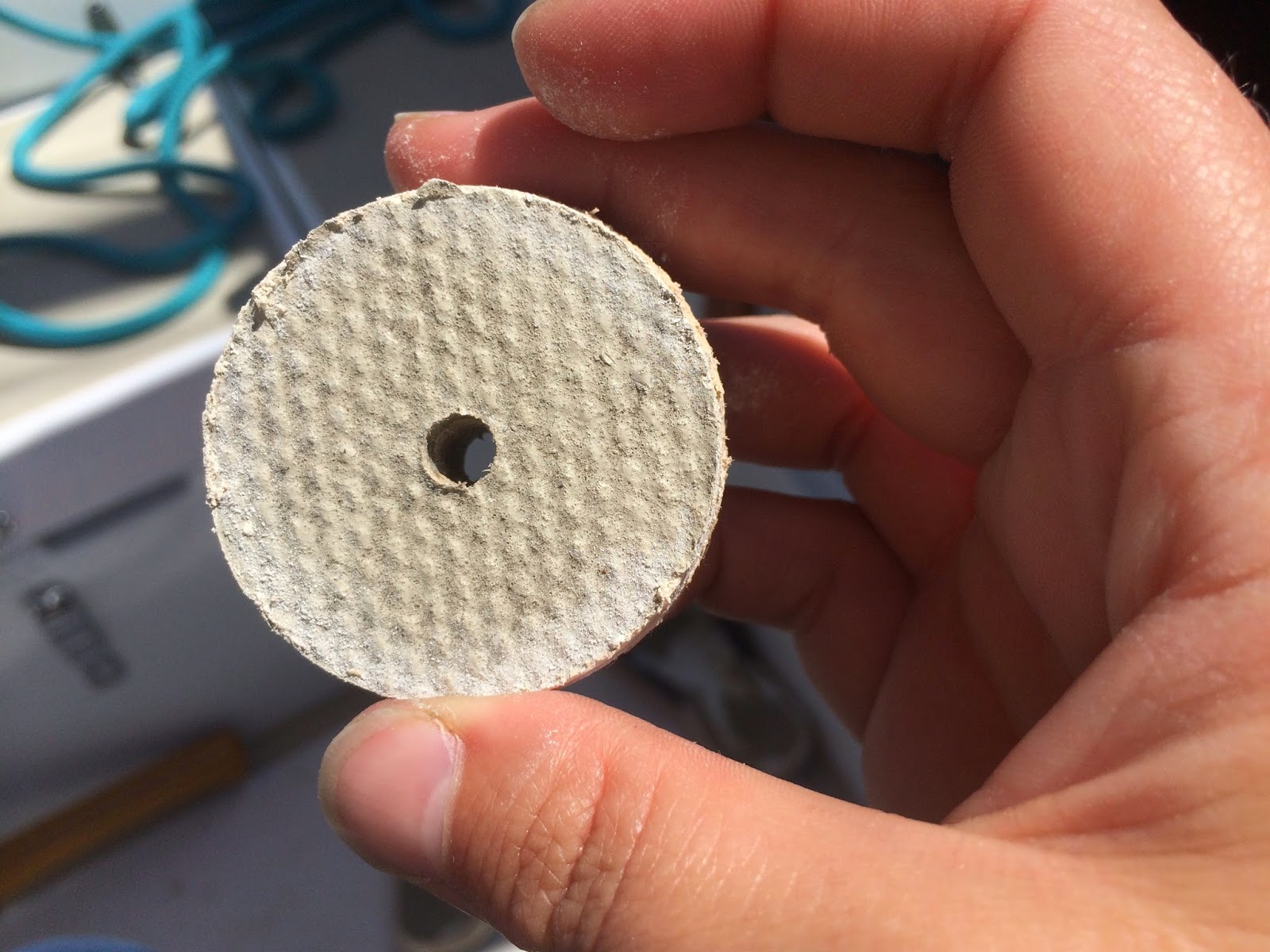 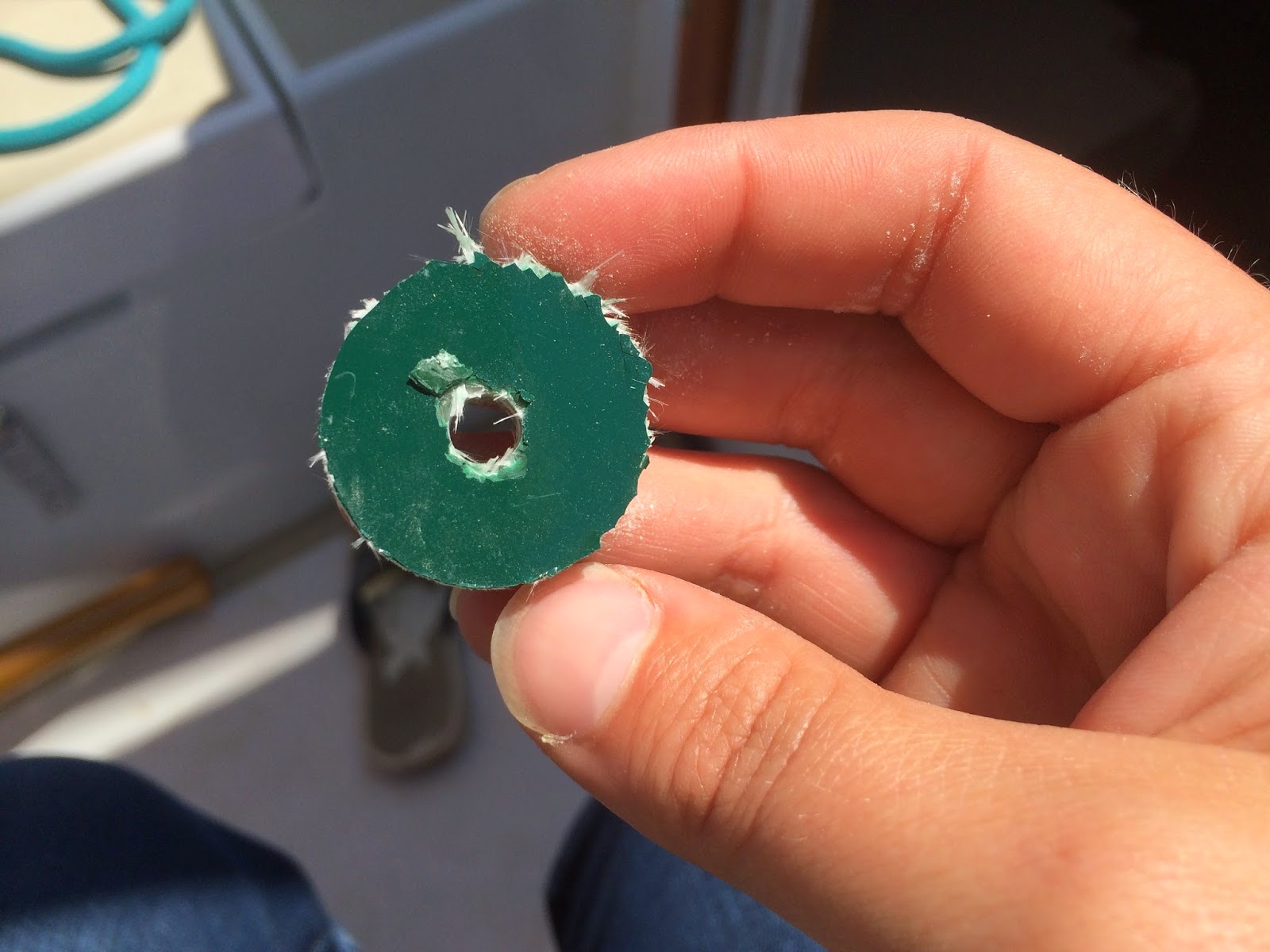 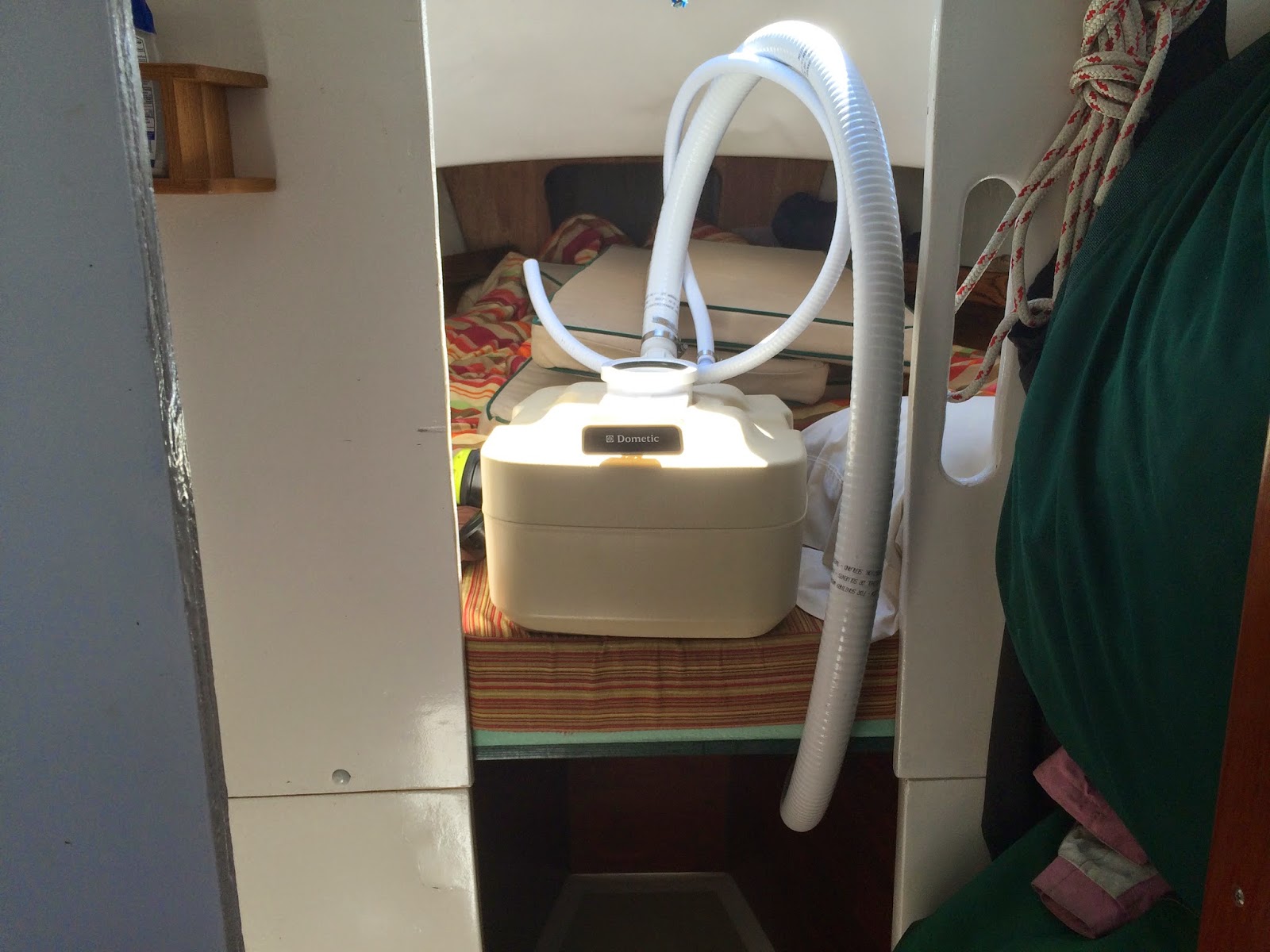 And finally the last crazy of the day.  I was down below messing around, then went out into the cockpit. I spied a 40 foot power boat (house boat?) monster thing sitting dead still in the water outside of Bay Boat Works.  It seemed to have no power.  I watched it for about ten minutes as it slowly drifted towards us.  Eventually we decided enough was enough (and the boat was getting perilously close to shore) so we hopped in the dingy and zipped over to see what was up.  I shouted up into the third deck pilothouse to the skipper, who said he was fine.  He actually started his motor and moved about 20 feet away from shore, churning mud all the way.  We figured he was ok so we started back to our boat, but he was drifting more rapidly towards the club's pier. Our second round of inquiries had the same result.  We decided to go for back up.  By the time the troops were rallied on the club workboat, the big motor yacht was drifting sideways straight through our mooring field, gently scraping past sailboats as it went.  Eventually some of the club members got on board and ascertained that the owner had come all the way from the Sassafras River. By the looks of his rub rails and hull I daresay he had hit quite a few objects on the way.  He confirmed he had a cell phone and water.  The boat evidently had no electrical and only one motor working at very low rpms for short periods.  He seemed confused and unconcerned about his predicament.  Using a pry bar, the guys were able to get the non functioning windlass to release the anchor chain and they were able set an anchor for him. 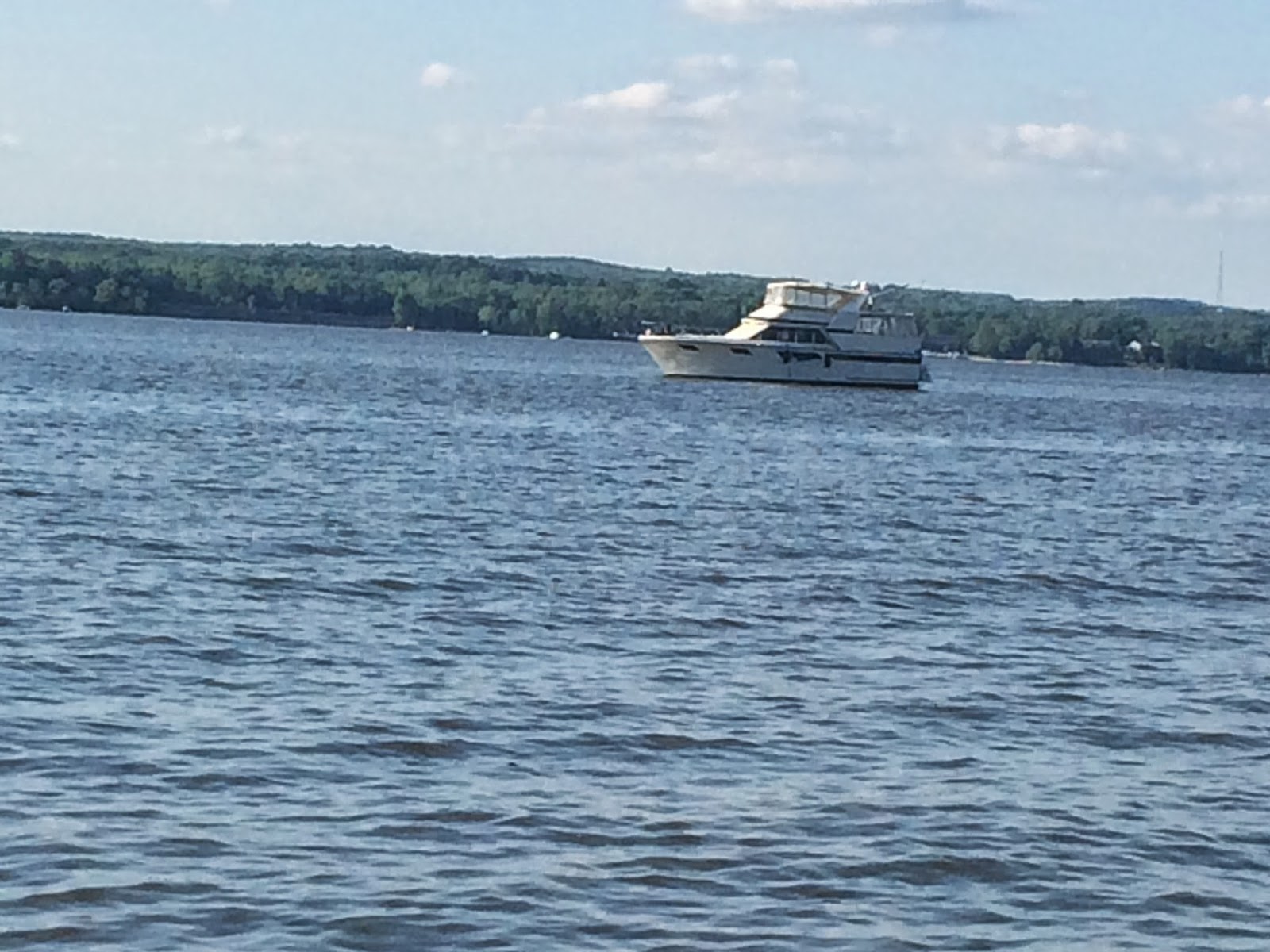 Sorry I don't have anything for scale. This is a BIG boat.  It was full of trash and junk so hard to tell if it was an elderly live aboard that just happened to decide to go on a wander today or what, but at least now when the tide turns and the water starts flowing out again, he won't be floating back down river through the mooring field again.

Posted by Dalloway at 6:09 PM No comments: 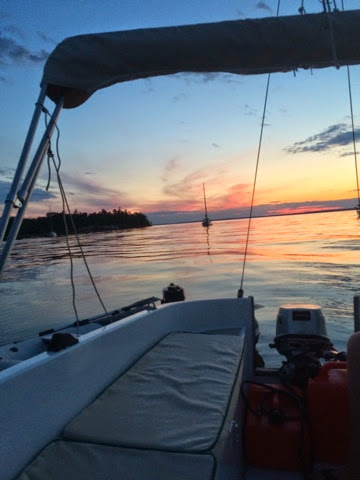 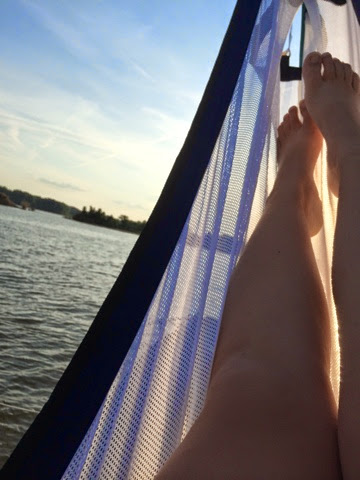 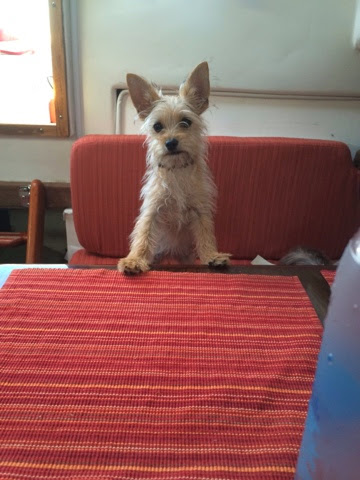 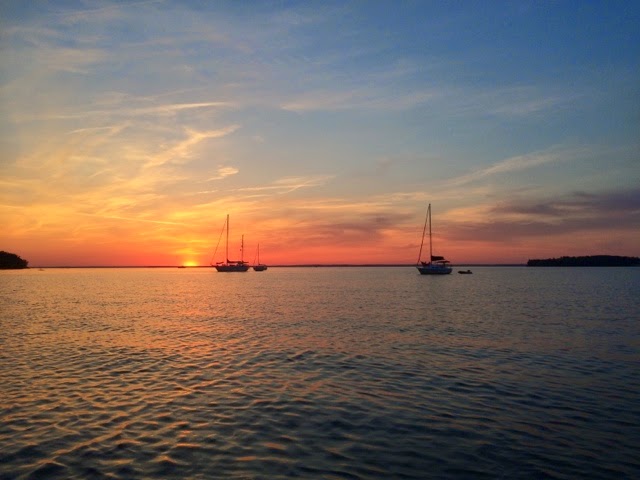 I broke the flush handle off the old toilet. Frankly it was rather leaky and gross anyway so we ordered the sanipottie 965 msd from defender. It is supposed to come today and we will plumb it in this weekend. It is a self contained unit but you can plumb to a deck fill for pump out and a vent hose. Seems pretty ideal. Next thing you know we will be putting in a shower. Just kidding. We are never putting in a shower.
Great weekends these past two trips out. Beautiful weather, but the wind has been up and down.  We went on a club sail and I have to say I was retry happy with our performance. Even with the giant new dinghy and everybody else being bigger than us we pretty much kept up with everyone! 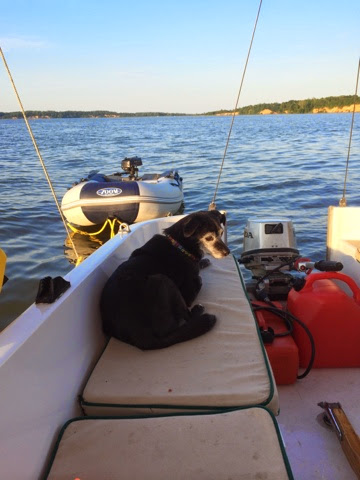 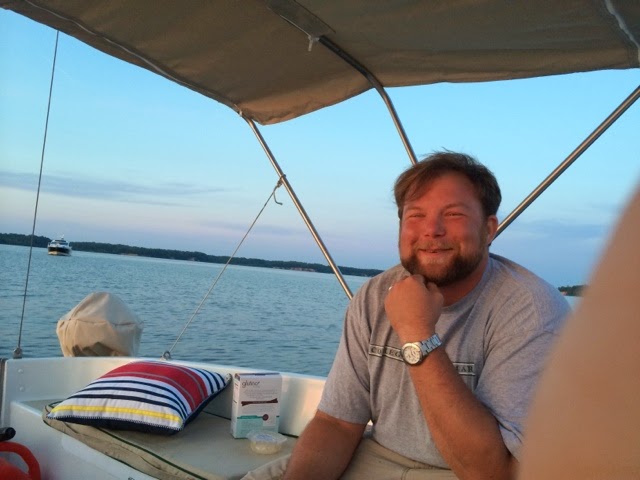 First and foremost I read my outboard motor's manual today. I had been considering ordering a flush kit so we could change the oil ourselves.  You can put the lower unit in a bucket of water and run it to warm it up, but I have always been skittish of doing it because it is scary to have the prop in the bucket.  We have done it this way in the past in a rain barrel, and when we bought it they demonstrated it in a large trash can full of water.  When reading the manual I learned that it is suggested that you REMOVE THE PROPELLER if you are going to run it in a bucket of water.  Phew. Dang.  Sometimes you really do benefit from reading the directions.

Now, onto the Dalloway.  This weekend we sanded the high filling primer some more.  A lot more.  A lot lot more.  I installed the boom hardware for the lazy jacks, and the jiffy reef system.  I found so many cheek blocks in the tool box that I think we must have bought them before Derecho and it just took this long to get around to installing the system.  I hauled the monster sewing machine to the club, took the final measurements, and finished the last little bit of sewing on the sail cover. 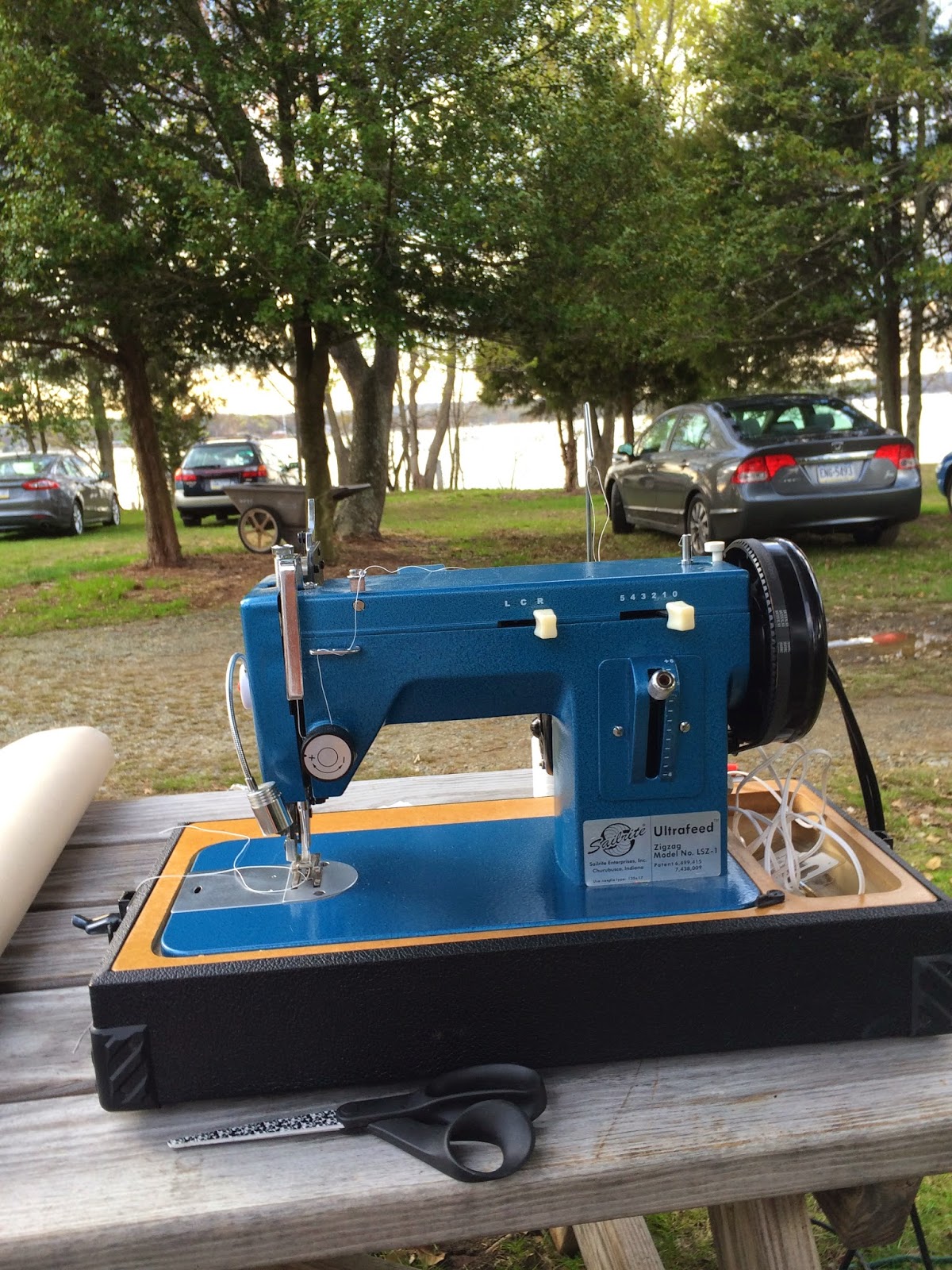 Then we took a little break to join the opening day parade.  Clothing was optional.  JK. Thank god. 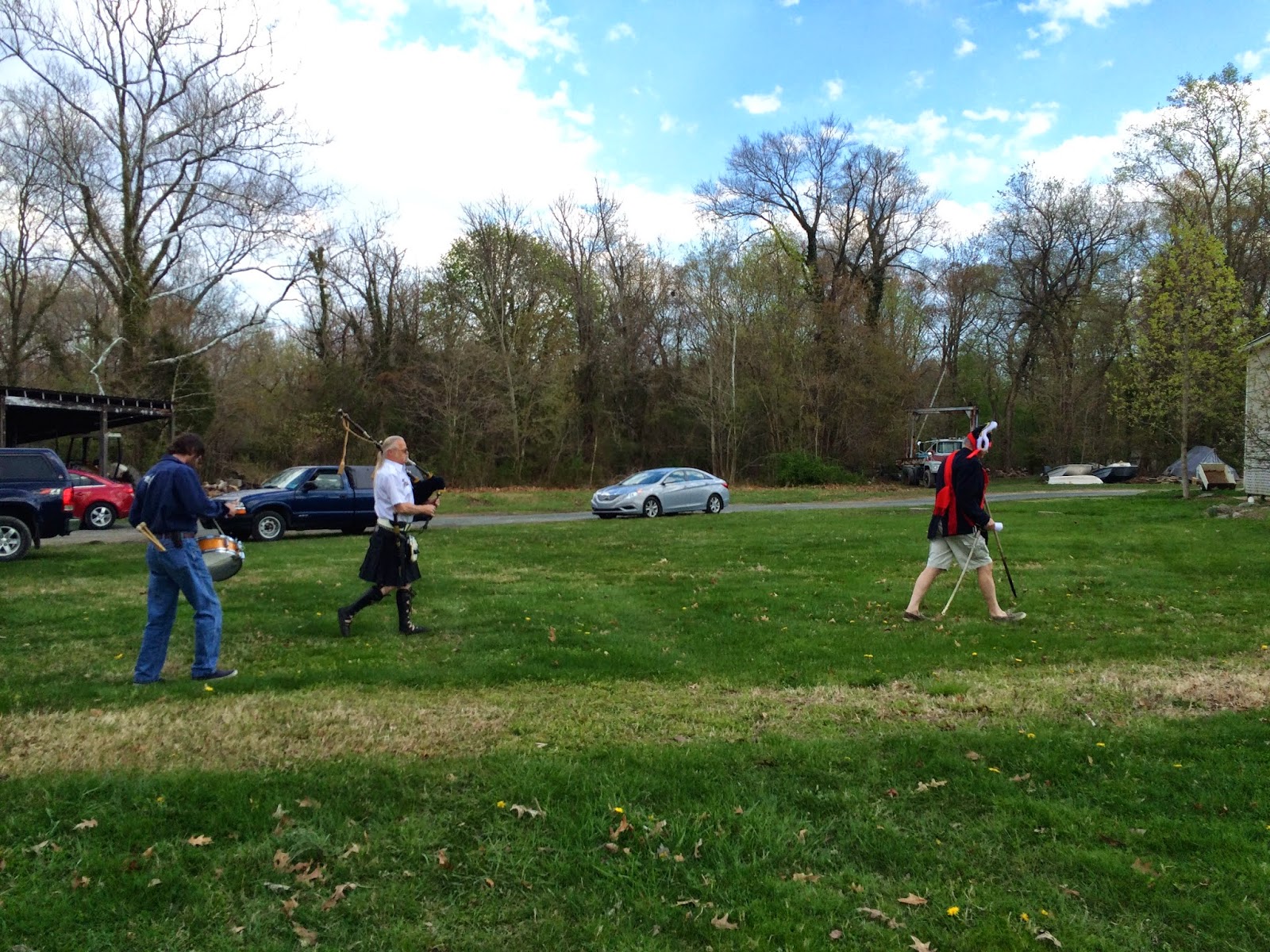 There was even a gentleman playing the bagpipes. He was quite impressive. 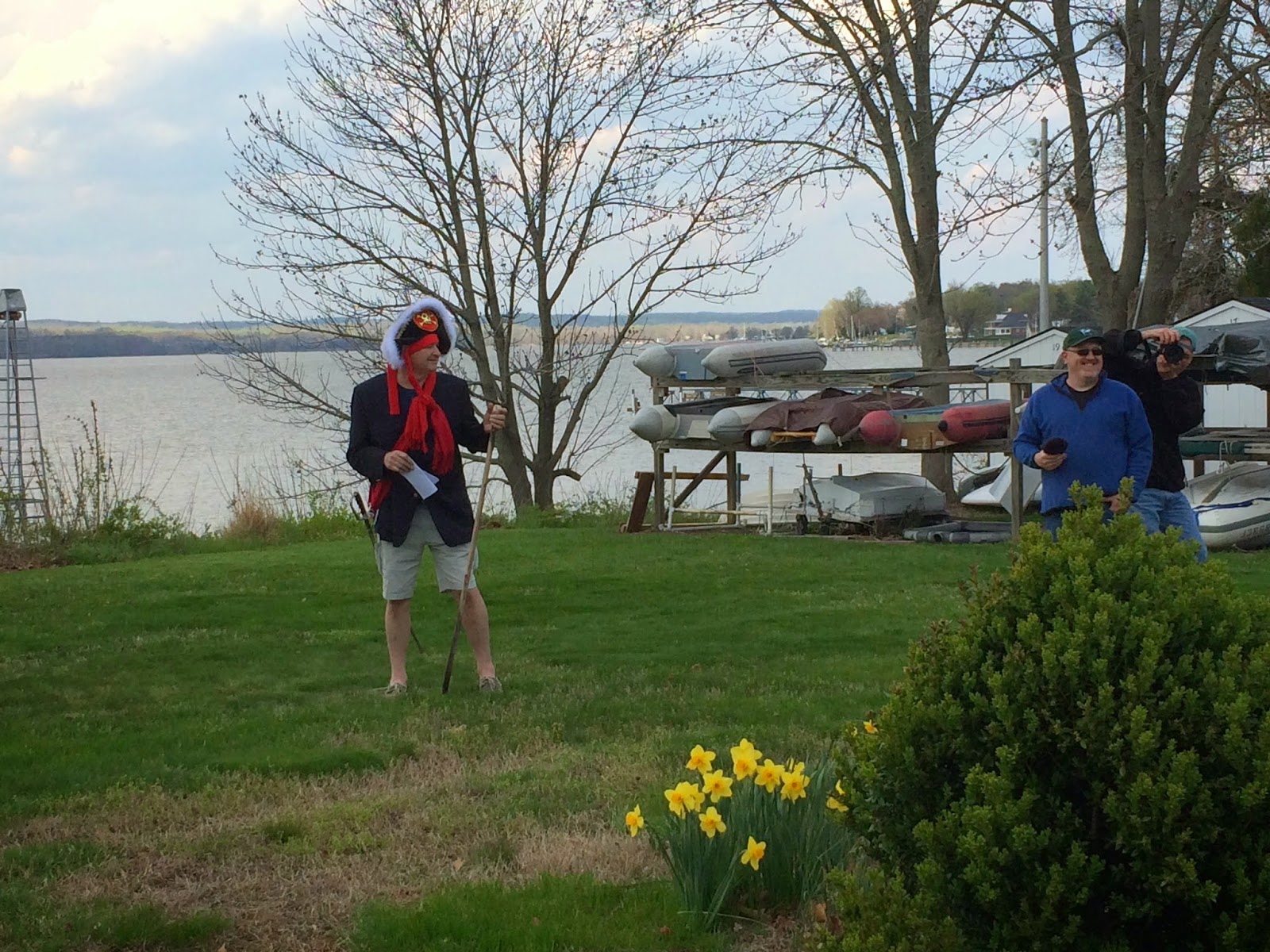 The boats were blessed, the cannon fired, and the flag was raised. 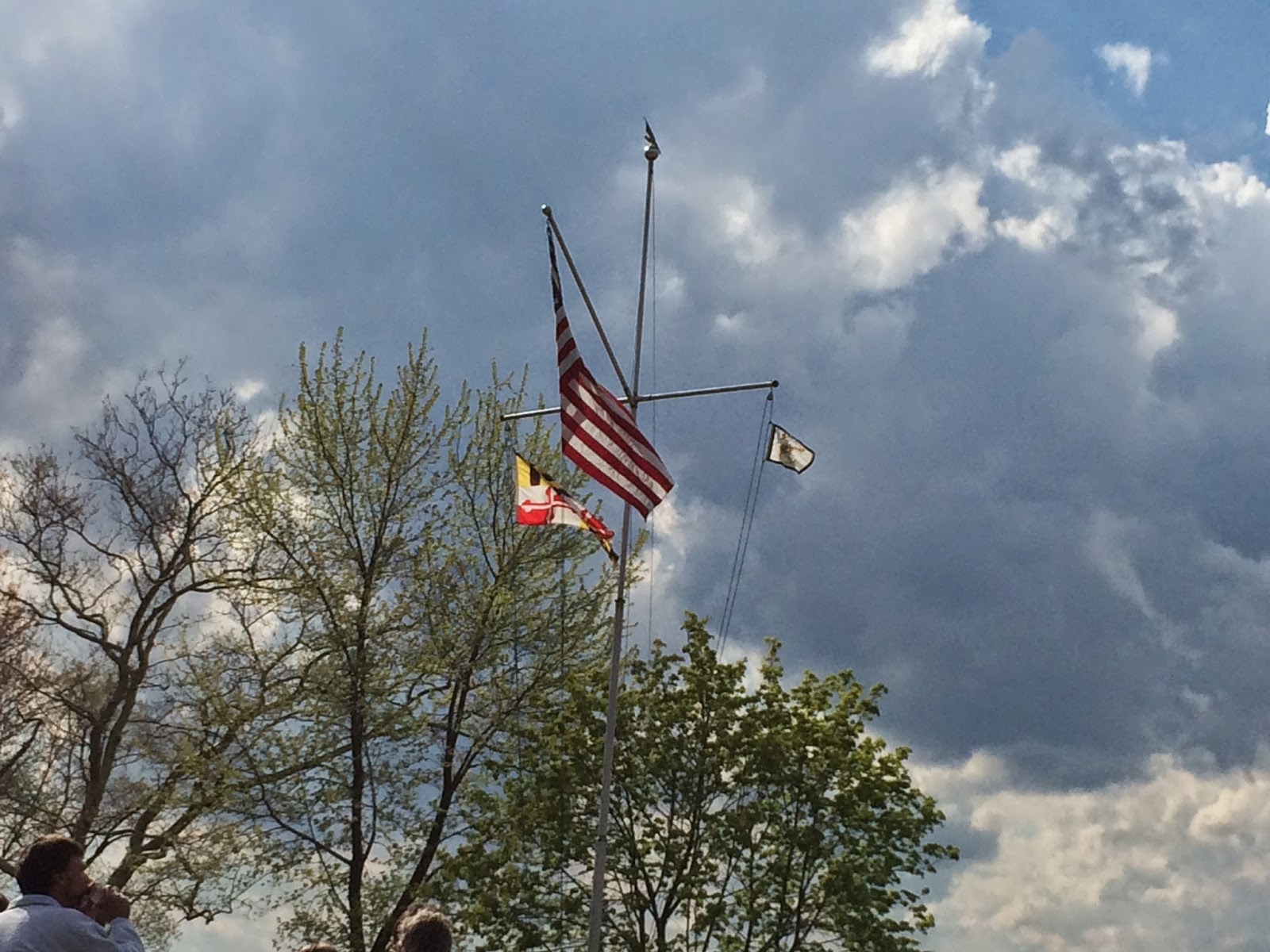 Afterwards I finally installed the stack pack.  This thing is really phenomenal. I can't say I necessarily recommend buying the sail rite kit but I absolutely recommend making one of these things.  Just watch the video on youtube, it really wasn't that hard. Having three sets of instructions made it so much more confusing than it had to be. 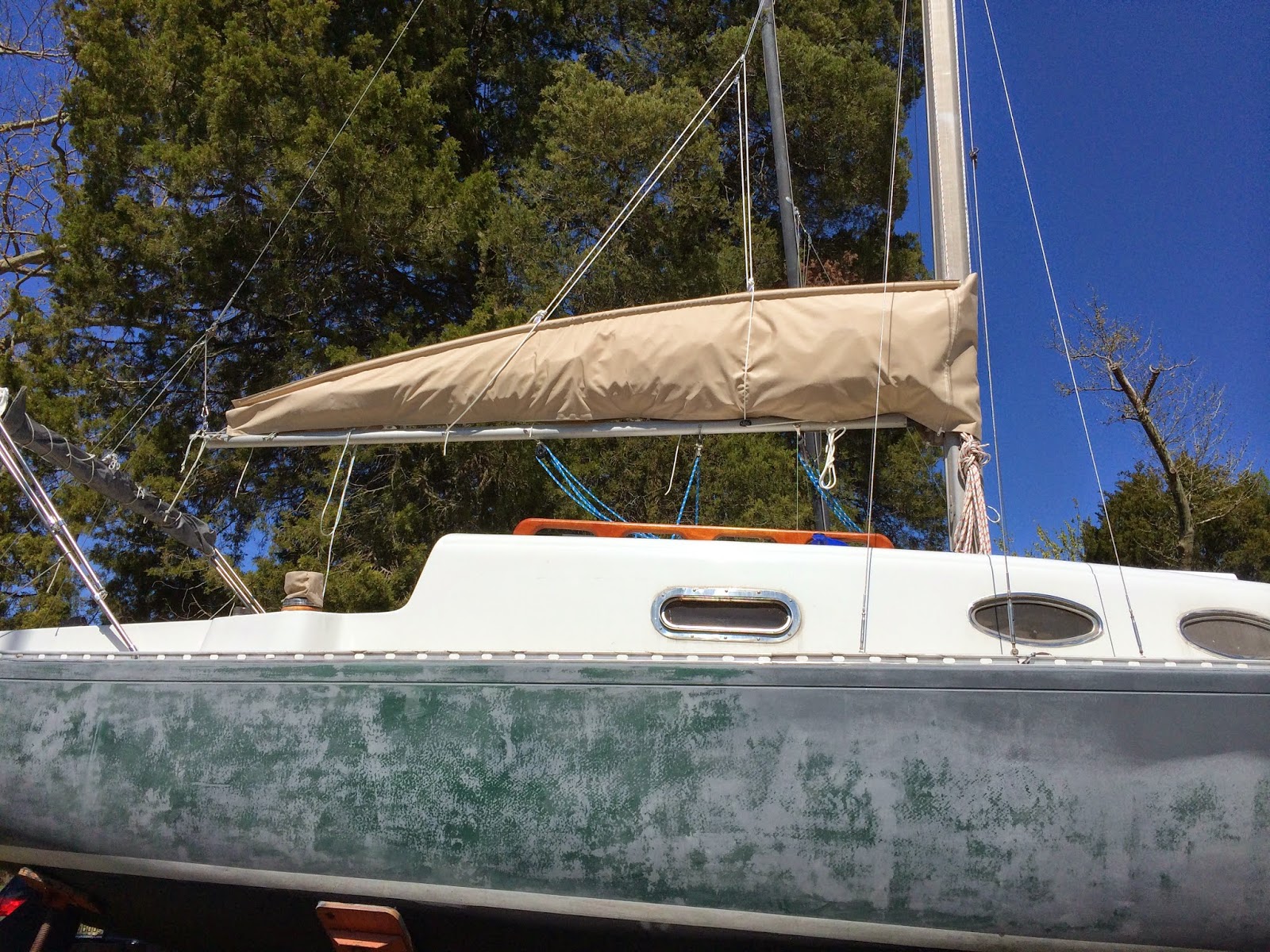 Then I assisted with the taping and the painting.  Here's a nice before and after photo. 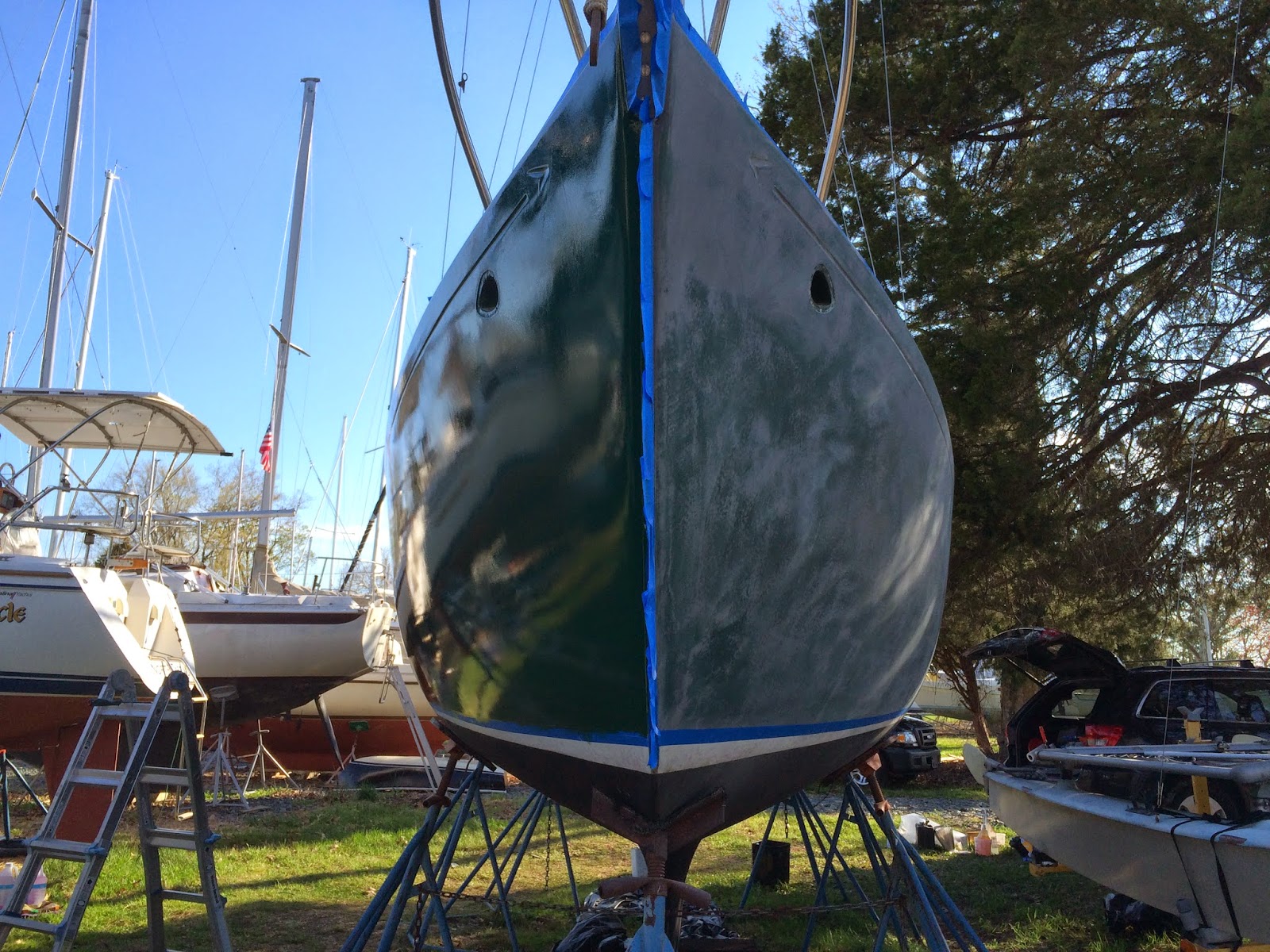 Coat one is complete, but we have to wait 16 hrs between coats and sand every time so our schedule just expanded quite a bit.  We will have to sand and paint saturday then sand and paint sunday. I don't think it very likely that we will be able to tape on the new paint until the following weekend so the boot stripe and the speed stripe will both have to wait. I am not entirely sure we won't lose patience with the whole thing and just launch.  (That's what happened with the filling primer.  We only did one coat. Hand sanding the whole boat to that extent was torture.)